Once We Were Islands 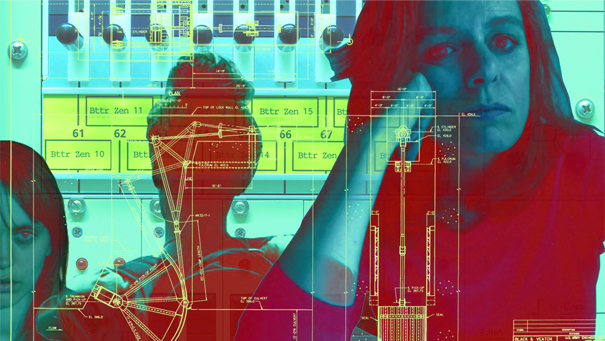 „We do not lack communication. On the contrary, we have too much of it. We lack creation. We lack resistance to the present.“ McKenzie Wark, A Hacker Manifesto (Version 4.0)

Seated at desks in a darkened room, three women read a fractured verbal score to a decaying choreography of intermittent light from desktop lamps. They are co­opted into a ‚machine‘ that scours combination after combination of fragmented dialogue for meaning. An algorithm juxtaposes each word against every other. New combinations throw up absurdity, unintentional meaning and shifting identities. A collage of contextuality and interchangeability arises as the machine attempts to understand identity and meaning in our world of online profiles and commodified personhood.
A, B, C, D, E, F ​is an exploration of our relationships with others. It seeks alternatives to the increasing commodification which breaks us down into qualitatively quantifiable code; points­based immigration systems, online dating websites, popularity quotients judged by clicks, likes, smiles and number of reposts. As the present becomes increasingly comprehensible through the discourse of Futurism and science fiction, the core question of Stanisław Lem’s 1961 novel ​Solaris ​is recast: How can we continue to communicate meaningfully among ourselves in a world where non­human intelligence is a constant intercessor in our interpersonal relationships?

Once We Were Islands ​is a collaboration between artistic directors Chris Gylee and Richard Aslan. Their work draws on performance, choreography, installation, audience­enacted experiences and documentation to create innovative artistic forms. Current areas of enquiry include; migration, hierarchy, personhood and identity, empathy, processes of change, category, gender and queerness. Scores and score­making is a major focus for their work.
A, B, C, D, E, F ​is the first full­length performed work that Once We Were Islands have produced in association with Ballhaus Ost.