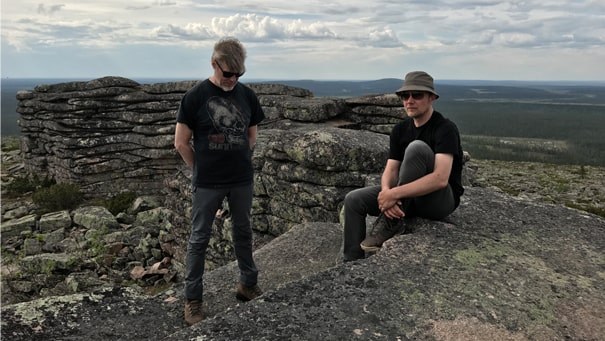 The music project ANGEL (now die ANGEL) was founded in Berlin in 1999 by Ilpo Väisänen (»Pan sonic«) and Dirk Dresselhaus (»Schneider TM«) and revolves around Instant compositions which are created through communication with sound in different spaces involving various sound sources, including but not limited to: modular systems, guitars, cello, bass clarinet, field recordings or everyday found objects.
The (die) ANGEL discography, spans 9 albums thus far, while manifesting a musical space that moves thematically between dystopia and utopia.
Between 2007 and 2014, three albums have been released by the Viennese label Editions Mego that can be considered their »drone trilogy« (Kalmukia, 26000 & Terra Null.) and to which a cast of international musicians have contributed in a variety of essential ways: Anthea Caddy, Oren Ambarchi, Lucio Capece & BJ Nilsen.
On June 15, 2019, on the occasion of the 20th ANGEL anniversary, a concert will be conducted; including all participating musicians from the »drone trilogy« as a world premiere in Berlin. The material that was created between 2006 and 2010 and describes the global events of this period in an intuitive abstracted way, will be reflected by reinterpretation and further development in the similarly changing current environment of today.

In co-production with MWM – MirrorWorldMusic and Editions Mego. In cooperation with D/B Digital in Berlin. Funded by the Initiative Neue Musik Berlin e. V.