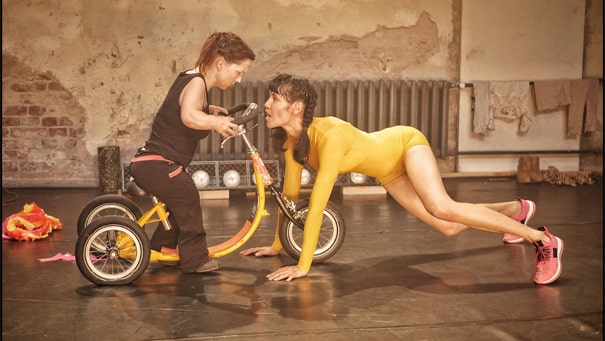 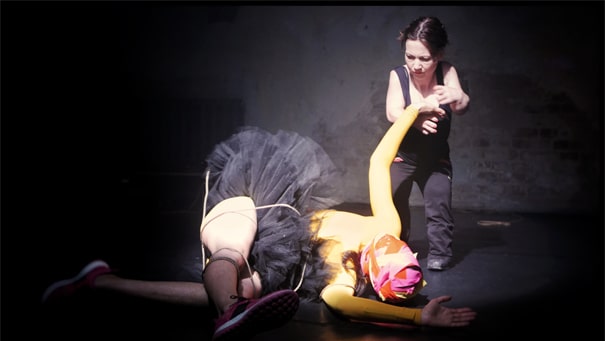 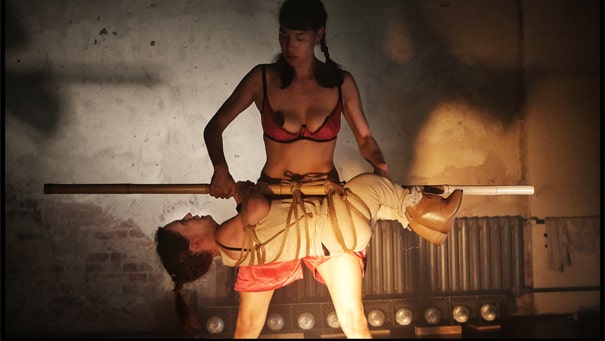 As part of »NO LIMITS – Disability & Performing Arts Festival Berlin 2019«

A 5’10 tall ballerina and a 3’8 small senior government official engage in a duel of classical dance and Japanese bondage art. With ropes, bodies and a thirst for adrenaline they explore physical and social patterns of connection, empowerment and constraint. Time begins to stretch or even stand still altogether. Form emerges out of sheer necessity. Until the unequal opponents almost become one.

Silke Schönfleisch first worked as a public prosecutor in Frankfurt/Main, then worked as a government director in Berlin and this summer moved to The Hague. She also works as a performer and engages voluntarily in the interests of people with disabilities. Dasniya Sommer is a dancer, choreographer, performer and bondage artist. She works regularly with international artists such as Romeo Castellucci, Schubot/Gradinger and Das Helmi. In 2016 she founded the Institute for Applied Rope Sciences.

A co-production by Dasniya Sommer and Silke Schönfleisch with Grenzenlos Kultur Theaterfestival Mainz and Sophiensæle Berlin.

NO LIMITS is Germany’s biggest and most important festival for Disability & Performing Arts and takes place in Berlin for the ninth time from November 6 to 16, 2019.
For this year’s edition Viennese choreographer Michael Turinsky is the first disabled artist to co-curate the festival. And: Most of the invited productions have been created by disabled artists who themselves are taking control of how they want to be represented on stage. They make the festival a laboratory of productive deviations in which oppositions and differences collide, initiate discussions and release energies to become a place of motion, reflection and encounter.
On display are works from over ten countries and from four continents that aesthetically sharpen current questions on art, society and disability and put them up for discussion.
The complete programme and detailed information on NO LIMITS can be found at no-limits-festival.de.