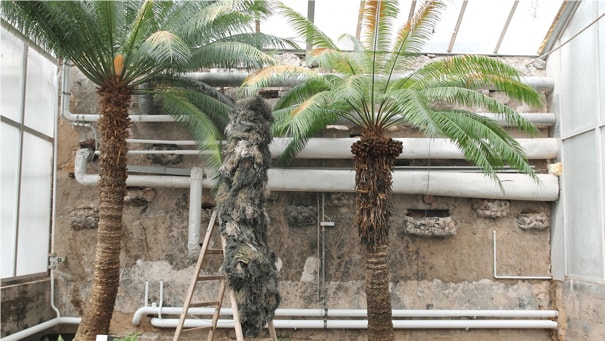 The only thing on the empty stage is a large plant. Emmilou Rößling makes us look very carefully and question the performance. This will be rewarded – images form and grow beyond themselves. Cascade proliferates in all corners of perception and gives its audience a hiding place on stage that it can crawl into very deeply – with the naked eye and only with that.

Emmilou Rößling is a choreographer, performer and author of texts. Born in Berlin, she studied dance and theater in London and Dublin. She graduated from the Master’s program in choreography and performance in Gießen with the piece Cascade. Emmilou’s works can take different forms, from solos, to DJ sets to performances. They often evolve around questions of representation and perception of the body and objects in search of a performance mode beyond the spectacular and always striving towards some form of camouflage. Emmilou works with Antonia Baehr, Valérie Castan, Ivana Müller, Monica Duncan, Romuald Krezel, Quast&Knoblich and others. In 2017, she received the DanceWeb scholarship and began PAP Berlin’s three year Mentoring Program with Alice Chauchat.

A production of Emmilou Rößling. With friendly support of Künstlerhaus Mousonturm, Hessen Theatre Academy and the German National Academic Foundation.