The true face – Dance is not enough 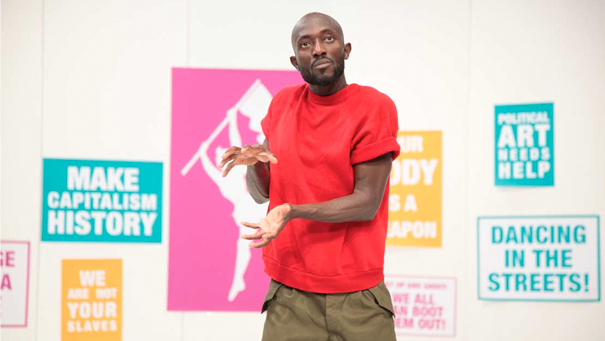 Christoph Winkler’s work explores current social and political events from the specific standpoint of dance. In The True Face – Dance is Not Enough, he takes a closer look at how conflicts between nation states and its citizens have been provoked by the crisis of capitalism. Blatant displays of power clash with creative displays of protest to reveal the various aesthetic forms of conflict – both as »classical« street theater, as well as in the political impetus behind contemporary art and arts activism. These bear eloquent witness to the emotional state of a generation, who have never known capitalism as anything other than in a constant state of crisis. But every ideological performance also has its gaps and inconsistencies that bear witness to what may have been overlooked. Police versus protestors doesn’t necessarily also represent strong versus weak. The »pantomimes« of protest produce a multitude of ambiguous and alternating meanings. So how and under what conditions is it at all possible to formulate protest?

performance in english and french

A Production of Christoph Winkler and ehrliche arbeit in co-operation with Ballhaus Ost
Funded by the city of Berlin and the three-year conceptual fund of the fonds Darstellende Künste e.V., made possible by the Federal Cultural Foundation
Supported by phase7

Winner of the 2014 »der Faust« Award for the best Choreography