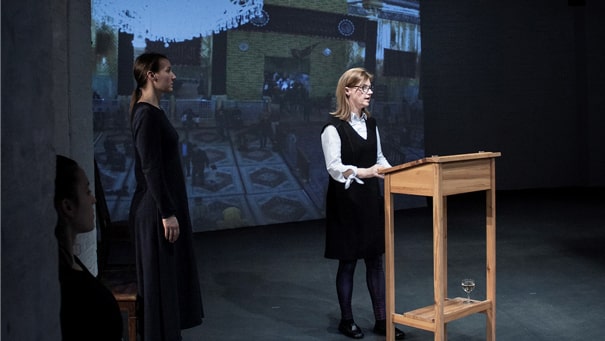 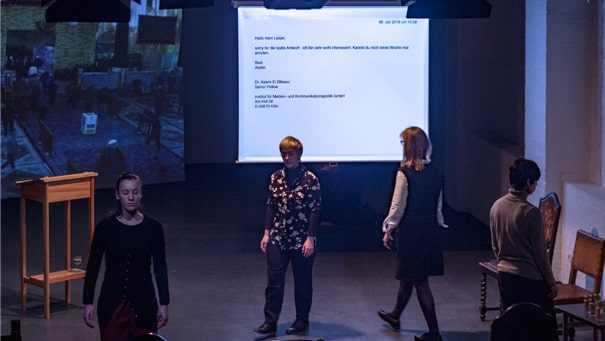 Die Räuber der Geschichte (The Robbers of History) is a format between symposium, installation and performance. Sebastian Blasius has commissioned four authors and scientists to formulate a possible different course of history between Western Europe and the Middle East. At the center of the questions: What if? Who could we be?
The current ideas of a backwardness of the West against Iran is no longer tenable, one text says. Another speculates, how to arrange an intercultural dialogue with the Ottoman oppressors. Performed by Anne Tismer, distorted images of our reality emerge in which implicitly new perspectives on our version of history, but also on our self-image appear. The closeness to Fake News seems tangible, formulated so precisely that one almost begins to believe in them.

Sebastian Blasius is theatre director, choreographer and lecturer. His works at the interface of performing, visual and acoustic art deal with topics such as identity, cultural heritage and the relationship between spectators and performers. He understands his work as a constant research in which various artistic, theoretical and political strategies are brought into a dialogue with each other.
Since 2014, he has increasingly been working on installative performances, including gallery and museum contexts. He is lecturer at several university departments for theatre, dance and theory.

A production by Sebastian Blasius in co-production with the Freies Werkstatt Theater Cologne. Funded by the City of Cologne and the Ministry of Culture and Science of the State of North Rhine-Westphalia.