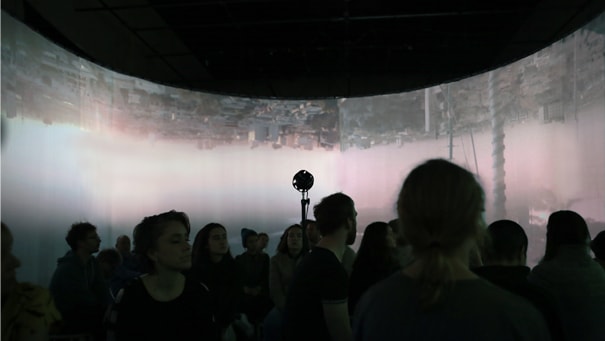 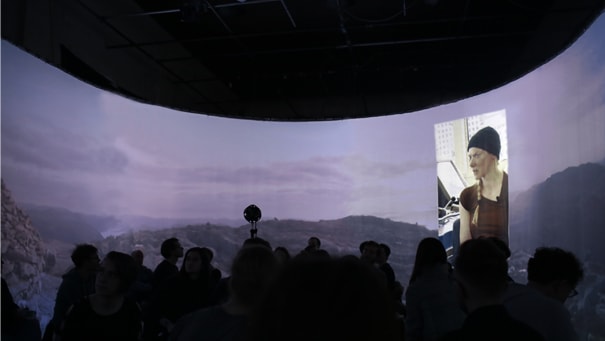 The Costa Compagnie researched with a 360°-camera in Norway and Iraq and now presents, as the conclusion of their trilogy around the globally crucial topic of oil, all three parts together in a row: An immersive 360°-documentary (part 1), a medially dense text-performance (part 2) and a profound choreography (part 3), accompanied by a virtual-reality-installation. Does the powerful resource entail the potential for a social welfare utopia like Norway or does it lead to a never-ending war, as in Iraq? Are there certain aesthetics to the oil-rich underground – the hidden? And will we survive the oil-age? The artist group leads the visitors through the complementary parts and media and creates an extraordinary art experience between abstraction and documentation. The first, cinematic part A Research in 360° passes the word to the interview partners onsite and investigates the connection between the global economy, climate change and conflict in a unique, cyclorama video space, displaying footage from Stavanger, Bergen, Erbil, Kirkuk and Mosul. The second, performative-analytical and musical part The Underground Frontier moves into a sensory medial reflection of the opposing countries and ends with a imaginary trip with the visitors. In the third part An Infinite Ending two dancers enter the cyclorama stage and, in a borderless choreographic work about speed, search for an ending.

The Berlin and Hamburg based Costa Compagnie was founded by Felix Meyer-Christian in 2009 as an open collaboration of interdisciplinary working emerging artists. The latest works combine documentary, performative and choreographic methods with an essayistic, multi-perspective narrative. The group pursues their concept of an Archeology of the Present and the focus of several works has been global transformational processes and the human within. Costa Compagnie thus conducts interviews, writes texts and collects audio- and video-footage on-site, such as in Afghanistan, the USA, Iraq, Russia, Fukushima/Japan, Norway and the Lebanon.

Performances in English and German.