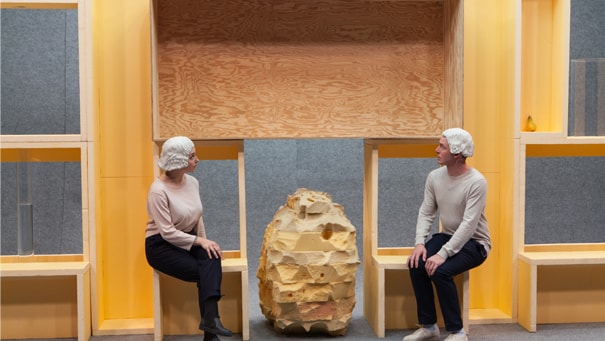 »What distinguishes Fresque by Old Masters is the extraordinary interplay of form, aesthetics, narrative mode and the performances of Charlotte Herzig and Marius Schaffter, who come up against each other in a kind of installative arrangement.
The piece’s distorted rhythm allows the spectators to experience time quite differently from the day-to-day. The interaction of stage, sound and light puts us into a kind of trance, freeing every single one of us to immerse ourselves in our own thoughts and reveries. The powerful images produce a kind of permanent vacancy between the intimate dialogues and the unambiguous psychological reductions to the human condition. An intimate piece, full of absurd and yet cathartic humour, telling us about love that lasts until death.« (Philippe Quesne, jury statement for the selection for the Stückemarkt of the Berlin Theatertreffen 2018)

Old Masters is a young collective composed of Marius Schaffter (performer and geographer), Jérôme Stünzi (artist and stage designer) et Sarah André (stage designer and artist, aka André André). Drawn by an aesthetic of derision, they undertake to deconstruct scientific and artistic discourse by evoking beauty and truth at the table of the mundane and the insignificant, while at the same time drawing from a modest reservoir of means and skills.

Performance in French with English surtitles.