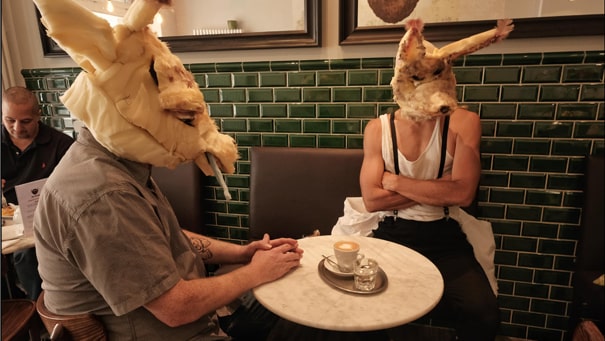 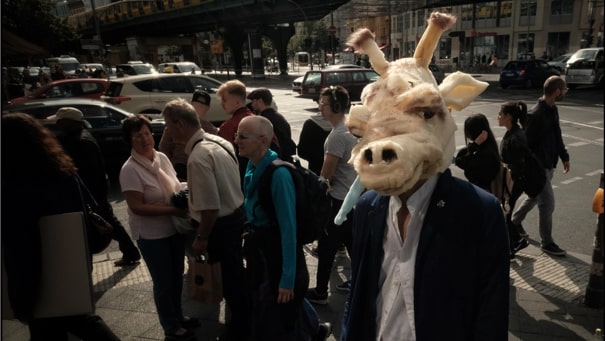 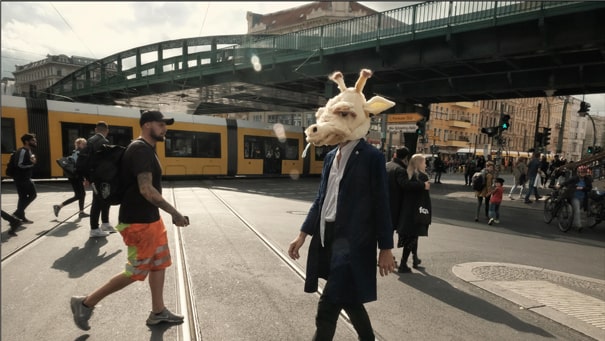 Inspired by US-american psychiatrist and storyteller Marshall Rosenberg’s method of „non-violent communication“ and the experiences made with it, Das Helmi goes on a world rescue mission with a team of socially stranded experts of the most diverse kinds.
First, it is necessary to describe the existential conflict that threatens us all: the violence that drives the world towards the abyss. Rosenberg sees violence in the structure of communication. And communication is everything. So we document as much as possible.
Then the surreal part begins. Rosenberg dares to consult giraffes and jackals even on serious topics, he designs puppets and lets them play. These animals are no escape fantasy, no cute nonsense. They represent attack and directness and confrontation. They talk with murderers and warlords, with people in terrible relationships or with children in the schoolyard. But they don’t mince their words. And they are not afraid. And sometimes there are poetic moments when the objective language is no longer sufficient.

Over the almost 20 years of its existence, Das Helmi has more and more evolved from a mere puppet theatre to a versatile collective of artists that regularly engages in fruitful artistic exchange with guests and guest ensembles. They like to deal with complex questions and present very open answers. Many puppets appear and speak, but there are also many elements from the fields of dance, performance and visual arts and in some works the narration moves into the background for strangely large meandering images.

A production of Das Helmi in cooperation with Ballhaus Ost. Funded by the Hauptstadtkulturfonds.