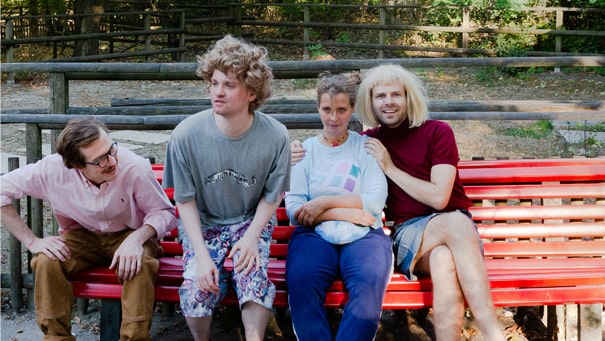 In their latest work, MedingScheerTibbe feat. Dworatzek direct their attention to one of the most popular german-language series of the 90s: Hier kommen die Schmidts! (Here come the Schmidts!)   The series aired on the 3rd channels of the public broadcast system and allowed audiences to follow the everyday life of a nuclear family within the context of current affairs over a 10 year span – showcasing the gritty to silly without being dreary.   In their performance the group proudly presents their favorite episodes along with some of the biggest hits from this time.
Both together – viewed from a distance – can provide a sharpened view of the idealized image and the actual everyday life of a nuclear family, then as now.

In their work, MedingScheerTibbe ask about power, its staging, and its  deconstruction: Who is speaking – where and when? Why does this person say what she actually says? Should I now hold my head in disbelief or not?
The »result« oscillates between lecture performance, (German) rock concert, and queer minimal theater. This time they work together with Hamburg based actress/filmmaker Kathrin Dworatzek, and dramaturge and producer Annett Hardegen.

A MedingScheerTibbe production in cooperation with Ballhaus Ost. Supported by the Berlin Senate Department for Culture and Europe. With friendly support of Vierte Welt and Theaterhaus Berlin Mitte.