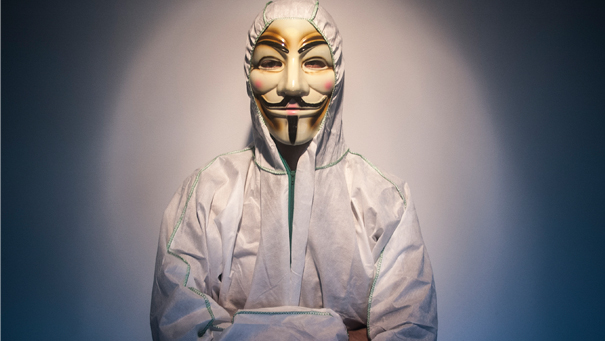 The anonymous theater group anonymoUS consists of successful performers with different backgrounds in theater, TV, film and contemporary dance. The group has been founded for this project. Their faces are hidden behind Guy-Fawkes-masks, their bodies behind bulky paper-body-suits and they perform with electronically distorted voices. At no point before, during or after the project the names of the participating artists will be revealed.
anonymoUS reflects on a paradox of marketing criticism. Even movements of protest and rebellion (often against capitalism) develop brands, follow the methods of marketing. Beyond activism, in the society at large one can observe the omnipresent take-over of marketing. Not only free-lancers, but also conventionally employed persons follow the neo-liberal logic of merging private lives and business-lives when presenting themselves on social networks or in physical places. They all promote themselves constantly. Neoliberal structure of ubiquitous self-promotion have been especially obvious in the arts. Artists have a market-value that depends on their presence at festivals, exhibitions, art spaces, residencies – which again also all have a market value. Curators, journalists and the public judge artists less according to their ideas but according to their market value as stated in their CV. Biographies become collections of credits, of rank-able institutions.
The artists of anonymoUS do not want to play this credit- and self-promotion game any more. And yet they want to present a strong piece of performing arts.
anonymoUS presents a performance that is loosely inspired by the heist movie Inside Man by Spike Lee (USA, 2006, with Denzel Washington, Clive Owen, Willem Dafoe and Jodie Foster). The performance applies the main plot of the movie to the theater situation. The movie is playing with various ways of masking motives. Lee’s bank robbers are not interested in money. They rather want to expose the true identity of the bank director who founded his bank by laundering Nazi money that was stolen from Jews during World-War II.
Insight Men pretends to be about banks, from bank robbery to the global financial crisis – but actually it is about the neoliberal attitude in everyday life. anonymoUS plays with the expectation of the audience – just like Lee when announcing a heist movie but delivering an original way of “historic reconciliation”. Masking themes and motivations also translates to masking all persons involved…

performance in german and english