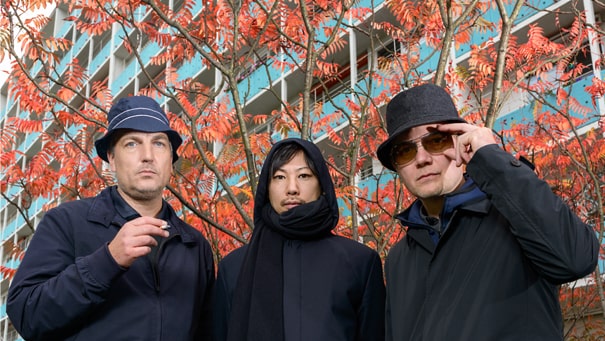 In 2015, Berlin-based musicians Dirk Dresselhaus (Schneider) and Christopher Uhe (Krite) start recording an album together. Alongside drummer Chikara Aoshima, they kick off something like a roots project: songs, written over the last couple of years, are tracked live as a trio. Out of infrequent sessions emerges the first Locust Fudge album in 20 years, which was released in April 2018 via PlayLoud!.
On 14.11.2018 at Ballhaus Ost Locust Fudge will be presenting the new material together with some of their guests, who also contributed to the album: Chris Brokaw, Lucio Capece, Angela Chambers, Werner ‚Zappi‘ Diermaier, Michael Muehlhaus, Wolfgang Seidel, Gwendolin Tägert & Julia Wilton.

Mondo Fumatore is oscillating space indie, full of mud-soaked melodies, blue exploding grooves and choruses from the velvet underground that thunder down the bumpy road. Mondo Fumatore’s pact with the devil was already done in the 90s. Meanwhile they are good friends and smoke the peace pipe together, stuffed with neo-kraut.

Chris Brokaw was a founding member of the seminal US bands Codeine and Come, collaborated with the likes of Thurston Moore, Boredoms, Evan Dando, GG Allin & Rhys Chatham, is currently part of The Lemonheads, The Martha’s Vineyard Ferries (w/ Bob Weston of Shellac) and playing as solo artist.