No Way Out – There’s a word for girls like you…

Flight of the escales 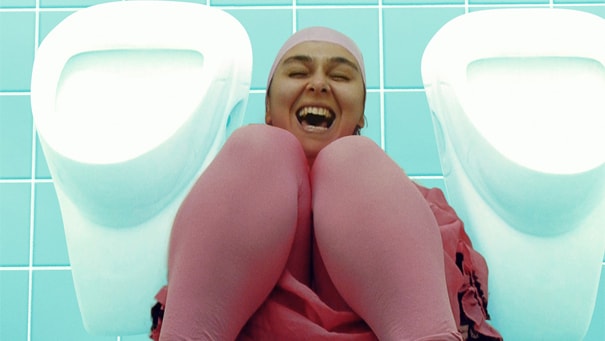 »Maybe I couldn’t make it. Maybe I don’t have a pretty smile, good teeth, nice tits, long legs, a cheeky arse, a sexy voice. Maybe I don’t know how to handle men and increase my market value, so that the rewards due to the feminine will accrue to me. Then again, maybe I’m sick of the masquerade. I’m sick of pretending eternal youth. I’m sick of belying my own intelligence, my own will, my own sex. I’m sick of peering at the world through false eyelashes, so everything I see is mixed with a shadow of bought hairs; I’m sick of weighting my head with a dead mane, unable to move my neck freely, terrified of rain, of wind, of dancing too vigorously in case I sweat into my lacquered curls. I’m sick of the Powder Room.« ― (Germaine Greer: »The Female Eunuch«)

No Way Out is a devised theatre piece that challenges female stereotypes. Locked in a toilet, our female characters find themselves trapped in a purgatory of patriarchal narratives. In an attempt to find a way out, they examine their stories, themselves and ultimately their fate. Placed side-by-side, irrespective of their narrative or historical context,  each character attempts to re-write and re-experience their penned fate, offering a different perspective to the stories we know.
Focusing on the representation of women – not just in literature but also on TV, stage, media and fashion, No Way Out questions the overall creation of the female image and narrative and seeks to debunk it.
The international ensemble bring their own cultures, literary traditions, national symbols and current events, to reinterpret these texts and characters; inspired by »The Taming of the Shrew«, »Don Quixote«, »House of Bernarda Alba«, Joan of Arc, Jane Eyre, the myth of Shahmaran, fairy tales, myths, Disney princesses, and pop queens.

A Flight of the Escales production. Funded by Arts Council England and Norfolk County Council. In cooperation with Camden People’s Theatre, London, The Cut, Halesworth, and Ballhaus Ost.