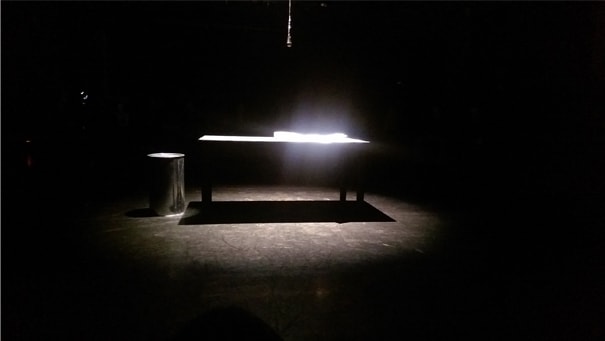 The State is a concept for theatre without actors and without a director. It explores the topics of how we build societies, how democracies function, whether there are agents-desctructors and what it takes to cooperate with others. It also tells the story of a real Bulgarian man – Plamen Goranov – who burnt himself in a protest against the system. Heavy corruption was the trigger of a wave of dissent among the poorest of the poorest in Bulgaria, who went on the streets in complete despair and disillusioned by the State. People had no faith in the State representing their interest anymore and answered with anger and aggression. The State was revealed as completely corrupt and helpless.
For two years the stages and theatre venues in Bulgaria were closed for The State until Berlin’s Theatertreffen decided to select the piece as one of the five Stueckemarkt winners in 2015. Since then The State has travelled around the world and has been invited to about 20 festivals and venues.

»As audience-actors we’re trapped, not just in the ‚play‘, but in the historical narrative, in the fact of a death, complicit, not just in the execution of a drama, but in culture of corruption, economic hardship, political deadlock and disenfranchisement that framed Goranov’s self-immolation and that of numerous others. ‚The State‘ takes us to one particular edge of the contemporary theatrical – a conceptual work, reflecting on the conditions of performance that nonetheless harnesses the power of narrative to look at real political issues.« (Tim Etchells)

The production is part of the program series »Grey Room«, initiated and realized by Critique&Culture e. V.. Funded by LOTTO-Stiftung Berlin.