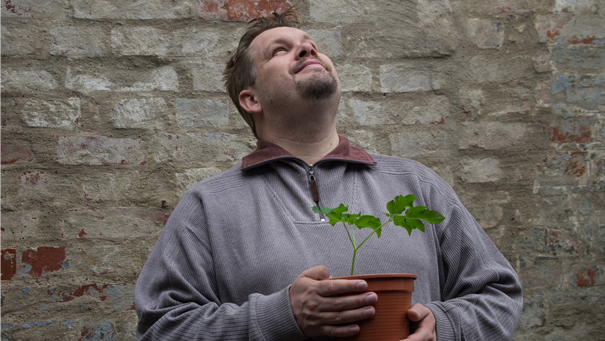 The theatre play Theatre of disgraceful people will be part of the International Parkinson and Movement Disorders Society Congress in Berlin this year. The premiere of the play was held in Lübeck in November 2014 as part of the 50-year anniversary of the University of Lübeck and was well-received by the public. The piece is a production of the Agency for Surplus comprising a director (Hans-Jörg Kapp), a neurologist (Alexander Münchau) and a philosopher (Timo Ogrzal) who closely cooperate with professional actors and musicians.
The Theatre of disgraceful people focuses on people with Tourette syndrome and various associated conditions including obsessive-compulsive disorder, attention deficit hyperactivity disorder and autism. Their lives, their problems and stigmatization are at the centre. Importantly, however, it is not only a play about people with Tourette but rather a play with Tourette: the performer Daniel Weber, suffering from Tourette, is one of the key figures. He is participating and in fact directing and structuring the play though his tics.
The Theatre of disgraceful people is a performance based on the Lettres de cachet, a collection of 17th century letters of French citizens addressed to the king or official representatives of the monarchy denouncing relatives and friends with the aim to get rid of them through detainment and imprisonment. They are accused of violations of societal rules and norms including adultery, drunkenness and impulsivity. In these letters, it is becoming obvious that most of the set rules are arbitrary and accusations are formulated not so much because of committed crimes but rather because the accused are »disgraceful«, disagreeable and considered difficult. The Lettres de cachet were commented on extensively by Michel Foucault in a monograph. In the Theatre of disgraceful people some of the »Lettres« are recited by actors and some are read by Daniel Weber who has Tourette. The »Lettres« are complemented by modern texts of people affected by Tourette and associated disorders and their relatives, neighbors, doctors and medical personnel with a similar theme of marginalization and stigmatization as in the 17th century »Lettres« becoming apparent. Daniel Weber’s ticcing, though, interrupts the play and provides a variable and unexpected rhythm. Through his position in the play and his dominant ticcing he becomes the director of the play. The classical hierarchical arrangement of the afflicted as the object of interest is reversed – he, the stigmatized, becomes the sovereign. The different scenes are framed by musical pieces by Schubert, the Beatles, Gordon Kampe and Matthew Shlomowitz.
The aim of the play is:
– To better understand the burden and stigma of patients with Tourette syndrome and related disorders
– To re-consider current classification schemes for movement disorders and categorical approaches to biological phenomena
– To reflect the concepts and boundaries of medically defined normality

Performance in German with English surtitles