What is to be done?
A cabinet of curiosities 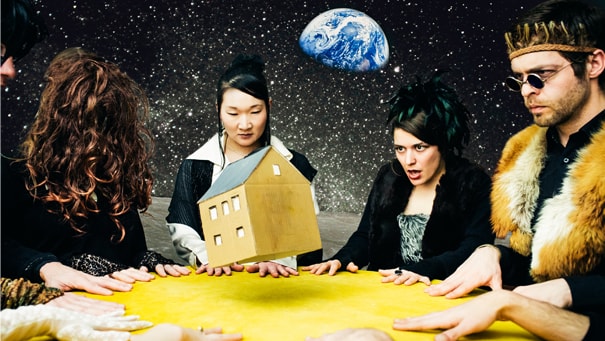 A commune of revolutionary sleepers and sleeping revolutionaries is put under the gun: the audience transforms into prospective buyers on a musical performative viewing tour and focuses on the art and every day life of the intermediate renters. Through the magic of music theatre a battle of clashing life plans, living dreams and lived realities in our present emerges. The director Anna-Sophie Weber and Opera Lab Berlin are developing a devised work of music theatre composed of theatrical compositions of contemporary music by various composers (Helmut Lachenmann, Peter Ablinger, Jennifer Walshe, Brigitta Muntendorf, Dieter Schnebel, Georges Aperghis, Simon Steen-Andersen, Carola Bauckholt, Hugo Morales Murguia, Neo Hülcker, Matthias Kaul und Aaron Einbond). Inspired by Nikolai Chernyshevsky’s 1863 social-utopian novel »What is to be done?«, in which young members of a commune in Moscow seek a new life and experiment with changing the macrocosm of society within their microcosm, we pursue the question: What is it like today, the right life within the false?

Opera Lab Berlin, founded in 2013, is a Berlin ensemble for contemporary music theatre and is devoted to combining contemporary music with all performing arts. Coming from all angles of music theatre, the ensemble brings together singers, instrumentalists, dancers, composers, directors, choreographers and light / stage / costume / makeup designers. We filter, boil and distill, dissolve, burn and freeze, combine, crystalize and melt; until something new emerges.